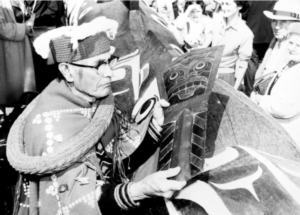 LOGLINE In the 1950s, a Jewish Austrian ethno-musicologist and a First Nations chief in British Columbia both recognized that the Canadian government’s ban on Indigenous ceremonies threatened the passing down of traditional Indigenous songs. They joined forces in a race against time to save hundreds of ancient songs from disappearing forever.

SYNOPSIS Chief Mungo Martin, a Kwakwaka’wakw artist and Dr. Ida Halpern, a Jewish Austrian ethnomusicologist, both recognized the urgent need to preserve Indigenous songs for future generations. When they first met in 1951, there were only a few people in each west coast First Nation who knew the old ways – the languages, laws, songs, dances and cultural practices. The loss of knowledge keepers had begun to decline steadily in the 19th century with waves of smallpox and other epidemics, and the introduction of the Canadian government’s “Indian Act”, which made it mandatory for children to attend Indian residential boarding schools and illegal to take part in cultural ceremonies like potlatches and sun dances. Ida was acutely aware of the long term impacts of these policies on Indigenous communities, since she herself had been forced to escape from Vienna in 1938 after the Nazi government started a policy of genocide of Jewish people in Europe. Recognizing their common life experience encouraged Mungo to agree to let Ida record 124 of his own songs, as well as compositions he knew from Haida, Nuu-chah-nulth and coast Salish cultures. Ida had already started recording Indigenous songs before she had met Mungo. Armed with a bulky reel-to-reel recorder, she had travelled to First Nations villages in coastal British Columbia beginning in 1947, and eventually convinced Chief Billy Assu and 15 other Indigenous singers to allow her to record their sacred and “everyday” songs. Over the course of five or more years, she recorded 350 songs that were later released in as albums by Folkways Records in the USA. Today, these recordings are used widely in Indigenous language programs, and are instrumental in the preservation and survival of the traditional songs of First Nations people in Canada.